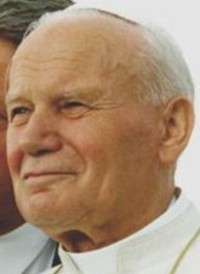 Karol Josef Wojtyla was born in Wadowice, Poland, on May 18, 1920. His father was a retired army officer and his mother, a school teacher. Karol began his studies with a focus on literature and philosophy and then later turned his talents to writing plays and poetry. During the Nazi occupation of Poland, Mr. Wojtyla studied theology clandestinely. Before his 40th birthday, he had already earned two doctorate degrees. He also taught ethics as a professor at a local university. At age 47, he became a cardinal and was thus charged with heading up the moral and social order in Poland, the only one that would check communist indoctrination. In October 1978, Mr. Wojtyla was called to lead the Roman Catholic Church as their first non-Italian pope in neary half a millennium. As pope, he took the name John Paul II.
Read More
Guest Book

Pope John Paul my prayers are selfish and I ask for things I cant have.. things that have escaped me till now. I pray for an unconditional love, for children and a family.. with love and peace. I pray that dreams be made reality for the good of those who ask. But mostly, I ask for my own peace. That I may find what my heart truly desires before it's too late. Pray for us.

Dear Pope John Paul,II: we miss you and and ask for your prayers now that you are with God. Our pastor gave me a little card with the Virgin Mary hugging you which was blessed by you personally and with this I ask for your intercession for my health and for all my family. We love you!

"Holy father, please pray for us"

"Pray for us Amen"

"Dear Lord, do not let my heart in troubled or afraid, for your Holy Spirit always be with me.."

"Bl. John Paul II pray for me so that I can dedicate my life to Merciful Jesus"

"Dear loving pope thank you for your prayers! things are changing"